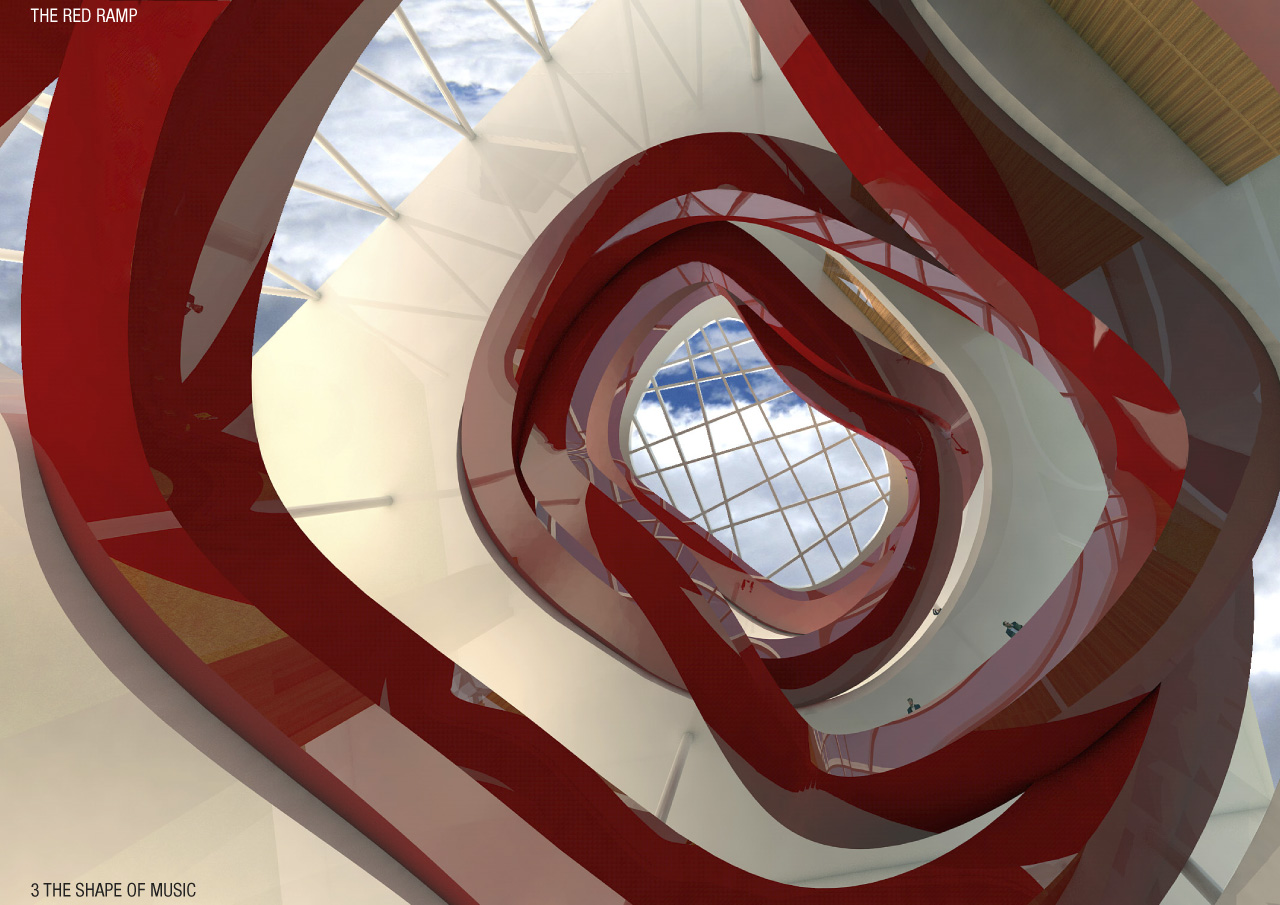 Design of the House of Hungarian Music comes from the choice to relate the experience of architecture with that of Hungarian music: transpose the most ethereal art in a concrete and buit form. The choice of the “Romanian folk dances” by Béla Bartók (especially n. 3) arises from the role that these compositions and their composer covering in the history of Hungarian music. The whole Bartók works were based on the scientific study of popular music: contamination that grew in tandem with the influence of contemporary rhythmic and harmonic innovations. In the “Romanian folk dances” Bartók plays the role of ferryman of traditional music in the twentieth century (the composition is 1915). Therefore the choice of Bartók is not the expression of a judgment that wants to put it above the other Hungarian composers (such as Liszt and Ligeti), but it is a choice due to his ability to bring together tradition and innovation, popular culture and high musical research. With these hopes the new House of Hungarian Music aims to be a container capable of receiving, attracting and contaminating people and every facet of the musical phenomenon, both historical and contemporary.

From music to architecture: the red ramp.

Bartók's score has been digitized working on duration, pitch and rhythm of individual notes. The new digital diagram delimits an area within the individual parts of the composition are extended: this flow (with a beginning and an end clear) deformed around a center generates the geometry of the red ramp. The decision to design the museum around the ramp descends directly from the experiences of the architecture of the modern movement and the twentieth century in general (see Wright's Guggenheim, Le Corbusier promenade, or the newer architectures by OMA); but it is also the result of the experience of space conveyed by the dynamic vision typical of our times. The use of the ramp is the materialization of the desire to lead the visitor along the learning path inside the museum, leaving the composition of Bartók, with its rhythms and harmonies, involves scanning the crossing of the spaces. The building is, therefore, as a ramp crossing, connects and orders a single plane bending that generates the halls of the museum. The additional elements are introduced: the outside walls are transparent (but oscurable) so the park is always well inside the experience of this particular architecture; the volumes that host the functions that need to be isolated whose wood coating is a reminiscence of the surface of a musical instrument.

The museum is integrated in the park addressing its main entrance at 1956 Memorial. Its presence within the park is denounced by the roof that juts out and fold right over the new promenade that will connect 1956 Memorial with the New National Gallery. The space at park level is designed as a covered square overlooked by the hard masses of services area. The visitor was invited to enter by the shape in plant and intrigued by the spatial compression of the entrances and he is immediately drawn to the ramp: the red ramp, clearly visible from outside, conveys the zenithal light inside the museum. This space is designed to be enjoyed as well as event hall and the event which takes place at the center: in addition to being observed from the hall the event has its most interesting observation points along the ramp. It creates a wrapping space that reflects the Shakespare “Globe Theatre” or “Theatre of the World” by Aldo Rossi, pursuing at the same time the choice that in the middle of the last century, Hans Scharoun had done for the Berlin Philharmonic: no place was privileged over another. The ramp runs through the museum until you get back to the entrance hall: along the uphill path intercepts the individual plans allowing access, while its long descent back to the lower level without any interruption. The first and second floors are designed for exhibitions. In particular, the first is for the permanent exhibitions while the second for the temporary. The structure is palced at the edge along the folds of the floor slab, leaving free space, traversed only by discrete structural elements and vertical connections system (with a structural function). The idea of this museum is of a fully reconfigurable space illuminated by natural light or a by continuous LEDs system along the entire surface of the roof. The top floor is the place where you can contemplate the city from the "UNESCO terrace", a glass cube suspended above the trees; where you can devote yourself to the ritual of listening inside the sound dome, that with the oculus at the center is modeled on the Pantheon mystical space; where you can attend conferences suspended 18 meters in height. But at the same time it is the place of the offices and meeting rooms, a place for contribute to the management, growth and programming of the new museum with tranquillity. The basement is divided into two distinct parts. Under the main entrance, settled in a court system there are learning spaces: here, isolated from the visitors flows, yet in the heart of the new museum learners are involved in educational activities that lead them to the understanding of the art of music. Well connected to the other floors the other part of the basement is a space designed to artworks, an obstacle-free route that easily take them to any part of the museum.